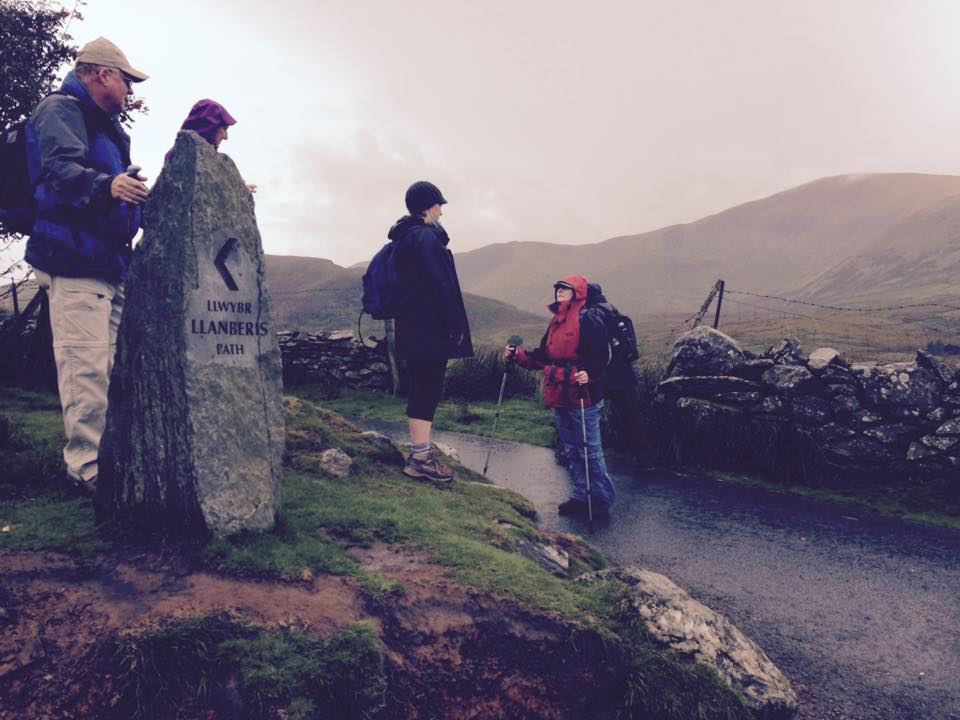 What a start to September!  Less than 1 week in and I have been trusted with a 1st day at school, babysitting and an adventure.  I have also gained something which should make my studio a warmer place to work.

It was finally the weekend of my sponsored walk up Snowdon, raising money for Children in Need and Macmillan Cancer Support in honour of my 1st internet customer, when the business was still quite new.  https://mydonate.bt.com/fundraisers/masseysmountainchallenge

Well, I spent a week packing and ensuring I had packed everything I needed (some joked I had only forgotten the kitchen sink!).  I travelled on the Thursday to stay with family, who live fairly near by and spent Friday with my niblings and actually feeling quite calm about it all.  Then we had the weather forecast!  For a week of beautiful sunshine was set to end with belting rain and winds of up to 40 miles an hour!  Even the trains were a probable for being cancelled, due to the weather conditions.

So, did this crazy bunch of people with various ailments shrink away from the challenge?  Did they decide to postpone for a better weather day (even the next day was much better!)?  No, we decided fortitude was the way go, put on our waterproofs and set out to do the best we could until we were blown back down.

The beauty of going with people was that, as we split into 3 groups to tackle 3 different routes, we all had support of each other.  Each looked out for the other and I was very blessed to have a few who were patient with me as I found some parts tough going, despite the training I had done (thank goodness I had!).  It wasn’t too cold, so I stayed in my shorts under my waterproofs, but was so glad I had them on!  It meant the rain didn’t get in to me for a few hours, which was very good.  I was loaned a pair of walking poles, for which I am very grateful too.

However, the weather made the going much slower and tougher than we hoped for and it became apparent that we would have to be like a road cycle team, rather than our initial thoughts.  There was no way that we could make it to the top in time to meet the train crew and so swap tickets so I could return safely.  This meant that I needed to be physically able to walk down the mountain too.  After halfway the wind was picking up and I was aware just how tough it would be.  Unfortunately at just 1.7 miles from the top, I knew I needed to let the good ones go ahead, so I didn’t give the wrong publicity by calling out the mountain rescue team.  Part of me felt a real failure, especially to all those who had the grace to sponsor me to take part and I wanted to honour them too.

Going up I had the words to a very old hymn come to me, “It was grace that brought me safe thus far and grace will lead me home.”  It is true that I did very well to even think to take part, much less to actually do it.  It is also true that this was a real lesson on allowing grace to myself to over rule fortitude in just going for it and not fully think through later problems.  Grace meant that, as I knew I had to turn back, so did some others and so I didn’t have to walk back down alone.  The tiny flows of rainwater we saw going up were now streams across the path, sometimes totally across the path and the wind blew the rain right through the waterproofs, so my socks soaked down and gave me a little paddling pool for my toes as I descended.  My legs turned to jelly near the bottom, but grace brought me home to our meeting place again.

The famous 5 made it to the top, 2 men, 2 women and 1 dog, walking both there and back.  Seeing 2 of them as they arrived back and how much they struggled (and knowing how lively they were as I left them), I knew that sometimes it can take much more fortitude to turn back and give yourself a chance, than to carry on.

Thank you everyone for everything.  I was inspired by the whole time and have a couple of small pieces of the stone there, in beautiful colours, which I will set in jewellery to remind me of the time.  1 person couldn’t join us due to a recent cancer diagnosis and instead is having support from Macmillan, which you are helping to pay for, so thank you. (by the way, that is me on the right of the picture, the cap under my hood meant the rain didn’t drip on my glasses!)