As you may know, when I started this business, I had a silent business partner of a cat. Unfortunately he died at the end of 2015.  This February I took a new cat into my home, with the hope of him becoming a new silent business partner.  I was persuaded and given the opportunity for a new cat, so I chose to pass on the opportunity for a safe and free life to a cat who was trapped in the flight and freeze of the light/fight/freeze asp 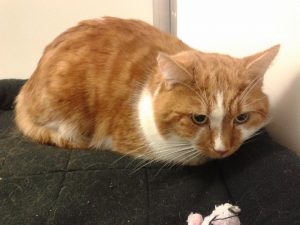 ect of depression and anxiety.  After being rescued by the animal shelter, he spent 3 months having tender loving care because he was so terrified, so they didn’t think he was up to being adopted.  They knew he must be moving in his space due to food and litter tray changes, but never saw him move.  I saw him when they just moved him to the standard space and he would sit at the back of the space or against the side.  So I tried to befriend him over a number of days before he came home with me.  I only saw him being still or crawling back in reverse.  I never saw him stand up or saw his back legs.  His pupils were so big I could only guess at his eye colour.

So I brought him home and he stayed in the travel box for the 1st evening.  I put it on the floor by his food and he wouldn’t eat.  I put his food inside the box and he ate.  I put his box next to me on the seat and he allowed me to touch him.  I took him, in his box, up to bed with me.  In the night he climbed out of his box and I stroked him.  His flight response kicked in and he ran away.

He spent the next week behind the settee, as I can’t reach there, often being under the settee or against the wall behind.  He only came out to explore when I was out or in bed.

After a week he grew braver and moved to the back bedroom.  Now he could see me more and occasionally let me near him.  As I climbed into bed at night I would hear him jump down to go around the house.

Gradually he would come down some stairs in the evening to see me and then to come nearer me.

Eventually I opened the cat flap for him to go outside.  He can now be outside or inside and is far more confident with me, sitting next to me and enjoying fusses.

Living alone means I don’t really need to close internal doors and my home is quite open plan.  I think he never learned to open doors in his past life.  If he sees a door 3/4 shut, to him it is fully shut and he has no right to try to open it.  Showing him how to push the door fills him with fear.  The same is true of his cat flap.  He was too afraid to be with me by his door so I began by wedging it open.  He saw it as open and gradually accepted he can use it.  I then lowered it little by little.  He learned that it is still open and he is safe to use it.  At 10% open he sees it as shut.  He sits by it and cries pitifully that he has had his rights removed, that he is now locked in/out and “woe is me”.  The door is still open and he still has his freedom.  His beliefs stop him from trusting what is given him.  His beliefs stop him from achieving his potential.  His beliefs upset him that he feels blocked and so he stresses and hides away again.

he is not stopped, he does have his freedom and he could choose to explore.

As often as I grow frustrated with his beliefs limiting his facts, so I know that I (and all of us) can choose “woe is me” rather than life.  We can all blame our circumstances for stopping us, rather than check if they actually are.  Just as Alfie has come a long way in trusting me, he a long way to go.  The same is true of us too.